Across the world, innovators from different sectors have invented devices, vehicles and medication that have solved our problems, made our lives easier and even saved lives. To name a few, Alexander Graham Bell invented the telephone in Scotland and Thomas Edison invented the light bulb in the United States. Now, Anthony Tay, 39 years old, is following their footsteps as he finds innovative solutions to electricity challenges using solar power.

Anthony Tay is a Liberian Information Technology (IT) professional who got involved in solar energy research and development through a slight twist of fate. In 2012, he was running an internet café on Duport Road in Paynesville near Monrovia. One day, a Kenyan businessman came looking for high speed internet to pay his employees online back in Kenya. The man was in Liberia attending a religious event and looking for innovative people to join a training program in Kenya. After chatting with Anthony, the man realized that he was using technology that was far more advanced than the other internet cafes he had visited. Anthony was using laptops when the other cafes were still using desktops. Anthony was also using boosters that enabled him to provide high speed internet. The man was able to pay his employees online in less than 15 minutes. After listening to Anthony’s brilliant ideas, the man invited him to Kenya to join the training program. While studying in Kenya, renewable energy stood out to Anthony as a solution to Liberia’s electricity challenges. From there, Anthony planned to register a company and deal in renewable energy products when he returned to Liberia. 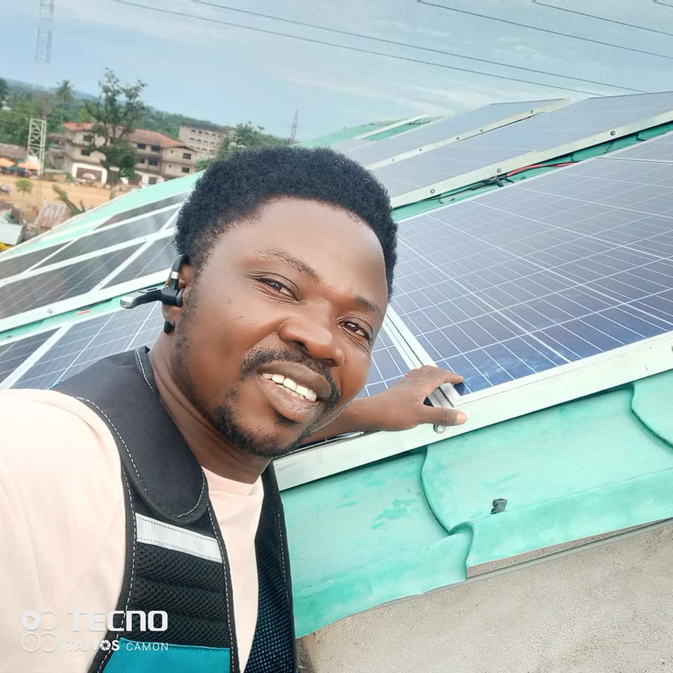 Upon his return, Anthony continued his studies in the area of solar, which led to his certification by the North American Board of Renewable Energy Practitioners. He later started a company called Africa Capital Turning Systems. Then he got a contract at the German Embassy where he did some computer networking. He used the money he earned to procure the first set of solar products for testing at his own facility.

Anthony’s first test was a mini-home system at the house he was living in. Before he moved in, the house had burned down due to problems with a tiger generator. The owner of the house was traumatized and refused to connect any electricity in the house after the incident. The place was in darkness. At the time, solar technology was already his focus, so Anthony installed the system and his family had electricity all the time from solar energy without noise and without needing gas, while other people had generators. He had provided a solution to a problem.

Then Anthony started providing IT and school management support services at Dekwwoah International School of Excellence (D-WISE), a new junior and senior high school located at Police Academy Junction. It is the first of its kind international smart school that runs on a 90% IT platform. Two years before the school opened, Anthony tried to convince the owner to invest in solar power, but the owner was in doubt. When the school started in 2020, they had challenges with electricity. They were running a generator that was costly. It finally broke down and the Liberia Electricity Corporation (LEC) transformer in the area was also down. The owner finally agreed to use solar power and Anthony installed the system. Now, the school runs on a 5KVA solar system that has been working for three months. Since then, the school has had electricity 24/7. It is estimated that the school will be saving up to 4 million dollars in the next 5 years due to the solar. They would have been paying this amount on fuel, generator maintenance and LEC. Based on this, the owner plans to upgrade the solar system to 45 KVAs within the next year. He now understands that the initial capital to set up a solar system may be high, but the long term benefits are worth it.

All the classes at D-WISE have ACs and smart boards, because it is a digital school. They don’t teach on blackboards or whiteboards. They teach on computer devices called smart boards, hence, the school cannot run without electricity. Their books are also stored and saved within the smart board. When there is no power, there are no classes. They also have a functional computer lab. That’s how important having constant electricity is to this facility. With solar energy, they were able to overcome that challenge.

In addition to solving the electricity problem at the school, Anthony observed that Liberians are having challenges with transportation. He owned a motor vehicle and the cost of fuel was so high. He saw people having to sleep in the line at gas stations during fuel shortages. “I thought, what could we do to get vehicles running on solar instead of gasoline and diesel? God has blessed Liberia with a lot of sunlight. How can we convert that blessing into benefits? So, I started processing and designing ways to convert cars to solar,” Anthony said.

The first test Anthony did was with an electric motorcycle that the Chinese government gave to the Liberia National Police. In 2016, the motorcycle developed problems and they wanted to throw it away, so Anthony took it and converted it to solar. He used it around town and it inspired him to do more. Then Anthony thought about how to help kekeh riders save some money by designing the solar kekeh. They would not use gas, oil or spark plugs. As long as there is day, the solar kekeh will have power.

Fortunately, Anthony came across electric kekehs in Liberia brought in from China. But they were becoming trash because electricity is not constant in the country. The electric kekeh needs to be charged with electricity, so when there is no LEC or generator, the driver can’t run the electric kekeh. So Anthony took an electric kekeh that somebody was about to trash and he converted it to a solar kekeh. The first test was done during the rainy season. He observed that once there is day with sunlight, the kekeh will be charged, even in the rainy season. Then he started talking to the company in China that manufactures electric kekehs. Since then, he has received 15 electric kekehs and converted them to solar kekehs. Anthony calls them solar kekehs because they are solar. An electric kekeh is a kekeh that runs on electricity. All electricity sources are not clean. An e-kekeh would need a generator or solar power station to charge when there is no LEC. A solar kekeh is different because it charges on its own when solar energy hits the solar panels on the roof. With the solar kekeh, while you are moving or parked, you are generating energy. If you park the solar kekeh and go to work for a few hours, by the time you leave, it’s already fully charged. From the solar panel to the battery, power is being stored.

Anthony’s solar kekeh sells for $3,500. Out of 15, 5 are currently in use. Anthony gets a lot of calls from people who want to take them on credit, but he can’t afford to take the risk. “If I could make a deal with a bank where my investment can be secured, I would give them out on credit,” he said. For now, Anthony Tay’s company has no international partners or investors. He has been using his own finances to develop these products.

When asked what he thought about Liberia’s Nationally Determined Contribution (NDC) target of importing 1,000 electric kekehs by 2025, Anthony said, “Solar energy is scientific. You cannot be testing a market and say you are going to bring a certain amount of e-kekehs or solar kekehs. That is not being realistic. I don’t doubt that the government can secure the importation of 1,000 kekehs in the next 5 years, but those e-kekehs or solar kekehs being put into use is another thing. Will they just be parked in the warehouse? Based on our pilot result, we will determine the level of importation and supply, because you do supply based on demand.” 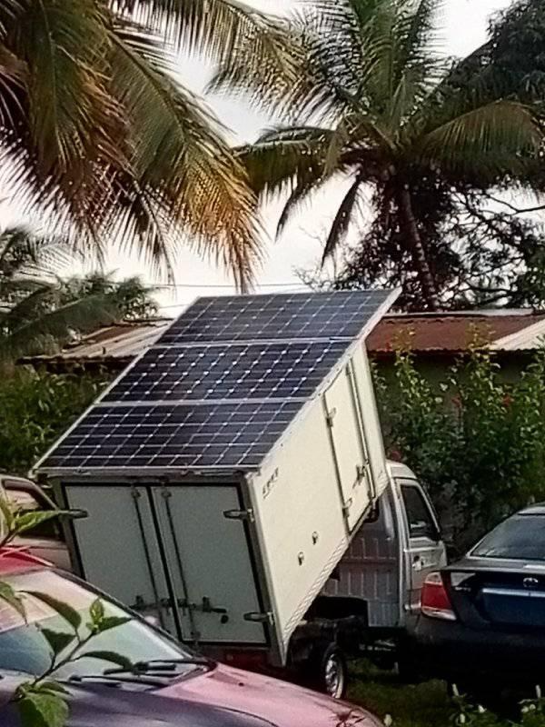 Anthony Tay is the first person in Liberia to successfully develop solar kekehs and the only for now. He has already tested a mini-solar car and solar pickup that will soon be in the traffic. He also plans to develop a solar cook stove, solar cold storage plant and solar bus for the school.