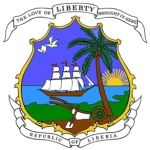 Liberia is a relatively small country located within the humid Upper Guinean Forest Ecosystem in West Africa on coast of the Atlantic Ocean. In terms of land area, Liberia approximately 111,369 km2, is the fifth smallest country in Africa.

The extreme southeast of the county is closer to the equator than any other coastal part of West Africa. It is closer to the South American Continent than any other African State, being about 1,600 km from Brazil (Wiles 2005). The country is located at latitudes 4°21‘N and 8°33‘ north of the equator and longitudes 11°28‘W and 7°32‘W. Within its borders, 15,050 km2 consist of water, and the remaining 96,319 km2 are land.

Liberia‘s Exclusive Economic Zone (EEZ) is 229,700 km2, extending 370.4 km (200 nautical mi) seaward from shore. The width of the continental shelf is generally limited by the 100 m isobaths, being wider off central Liberia (Wiles 2005). Four physiographic regions, corresponding largely to increasing elevation, are apparent in Liberia. All the physiographic regions are roughly parallel the coast (Gatter 1997).